Hundreds of years ahead of his time: Leonardo da Vinci’s extraordinarily detailed anatomical drawings show he was more than a match for today’s medical technology 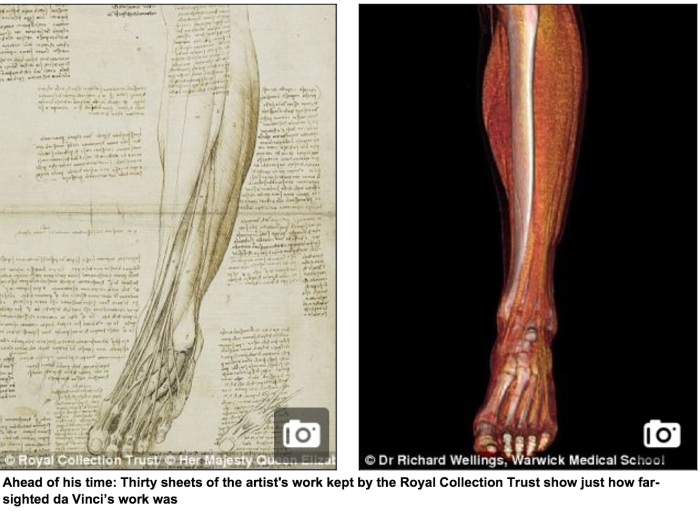 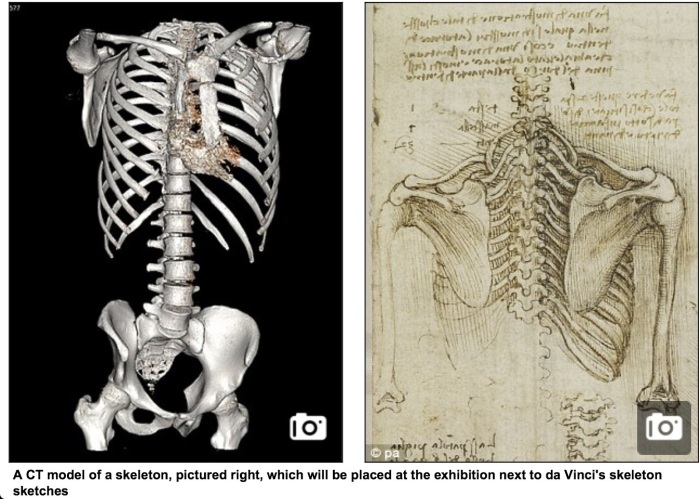 We can pinpoint the emergence of Leonardo da Vinci’s interest in human anatomy with some accuracy. It was at the end of the 1480s, when he was working for Ludovico Maria Sforza, the swarthy ruler of Milan. One day Leonardo sat down and inscribed the top of a sheet of paper using his idiosyncratic right-to-left mirror writing with the words, “On the 2nd day of April 1489”, adding later: “Book entitled On the Human Figure”.

As a new exhibition of his anatomical studies at the Queen’s Gallery at the Palace of Holyroodhouse in Edinburgh suggests, though, it would be another two decades before he really hit his stride.
In 1489, Leonardo was still in his thirties, a brilliant painter who, in the years that followed, also undertook miscellaneous work for Ludovico, such as building canals. He executed a series of breathtaking studies of a human skull that presented every bony bump, nodule and cranial kink with such crystal-clear precision that they must have been based upon direct observation. But he didn’t have sufficient clout to secure access to the corpses he needed to take his studies further.

By 1507, though, when he was in his mid-fifties, he was universally respected as one of the most famous artists in Europe. As a result he experienced less difficulty in getting hold of what he required. That winter, he dissected the corpse of an old man who had died before his eyes in the hospital of Santa Maria Nuova in Florence. By the time of his own death in 1519, Leonardo had sliced into and examined more than 30 human cadavers.

His greatest flurry of activity in this sphere occurred during the winter of 1510-11, when it seems that Leonardo was working in collaboration with a young professor of anatomy called Marcantonio della Torre at the university of Pavia, 20 miles south of Milan. The 18 sheets that he compiled during the months they worked together represent the most sustained and systematic foray into anatomy in his career, when his long-held dream of publishing a groundbreaking treatise on the human figure came tantalisingly close to being realised. Known collectively as the Anatomical Manuscript A, these sheets contain more than 240 individual drawings and over 13,000 words of notes. They are now in the Royal Collection, and form the backbone of the new exhibition at the Queen’s Gallery.

It is only a year, of course, since Leonardo da Vinci: Anatomist, a magnificent exhibition at the Queen’s Gallery at Buckingham Palace that showcased the full breadth of around 200 sheets of anatomical studies by Leonardo in the Royal Collection. Inevitably, the new exhibition, also curated by Martin Clayton, feels less significant. While it sets Anatomical Manuscript A in context by providing a handful of representative sheets from earlier and later in Leonardo’s career, including one of the famous 1489 drawings of a sectioned skull, it does not offer a comprehensive overview of his activities as an anatomist.

What it does do, though, which last year’s exhibition did not, is juxtapose Leonardo’s anatomical investigations from 1510-11 with state-of-the-art modern medical technology such as CT and MRI scans and 3D films. In doing so, it not only encourages us to consider how farsighted Leonardo’s drawings were, but also brings us closer to his mindset when he made them.

His sheet recording the bones and muscles of the arm provides a good example. This page, which meticulously presents the different components of the forearm, including the radius and ulna bones and the biceps, is shown alongside an animation that demonstrates how the muscles contract and relax in order to make the arm flex and rotate. Comparing the two, we realise that Leonardo was not interested simply in recording what he saw. He also wanted to understand how the nuts and bolts of our bodies actually function.

For this reason, his page devoted to the forearm offers not just one or two drawings but an entire sequence, so that the bones and muscles seem to swivel and tauten before our eyes – just as the pages of a flipbook cumulatively provide the impression of movement. Leonardo correctly concluded that as well as flexing the arm at the elbow the biceps rotates the palm upwards and downwards. This would not be observed again for more than two centuries.

The exhibition is full of sophisticated techniques like this that were designed to enhance our understanding of how human bodies work, and not just how they appear internally. At first glance, with their tangled tendons and masses of muscle, Leonardo’s dispassionate pen-and-ink studies can appear like aerial photographs of motorway spaghetti junctions. But compared with the blood-and-guts chaos of the human body, in which everything is crushed up against each other, they are models of clarity and insight – as the accompanying medical imagery makes plain.

In some instances, Leonardo’s presentation of information is arguably crisper and more lucid than the modern-day animations alongside which they appear: his study of the lower leg, for example, is more straightforward to understand than the complex model of a lower leg assembled using computed tomography (CT) on a nearby screen.

In 1510-11, then, Leonardo found a solution to a problem still faced by anatomists today: how best to present discoveries gleaned during messy dissection. His understanding of functional anatomy was unique during the Renaissance. Had he published his treatise on the human figure, he would surely be ranked among the greatest scientists of all time. – the telegraph

De Divina Proportione (About the divine proportions) is a famous book on mathematics written by Luca Pacioli around 1497 in Milan. Today only two versions of the original manuscript are believed still to exist. The subject was mathematical and artistic proportions, and the book was illustrated by Leonardo da Vinci. – Wikipedia

Its easier to resist at the beginning then at the end. – Leonardo da Vinci